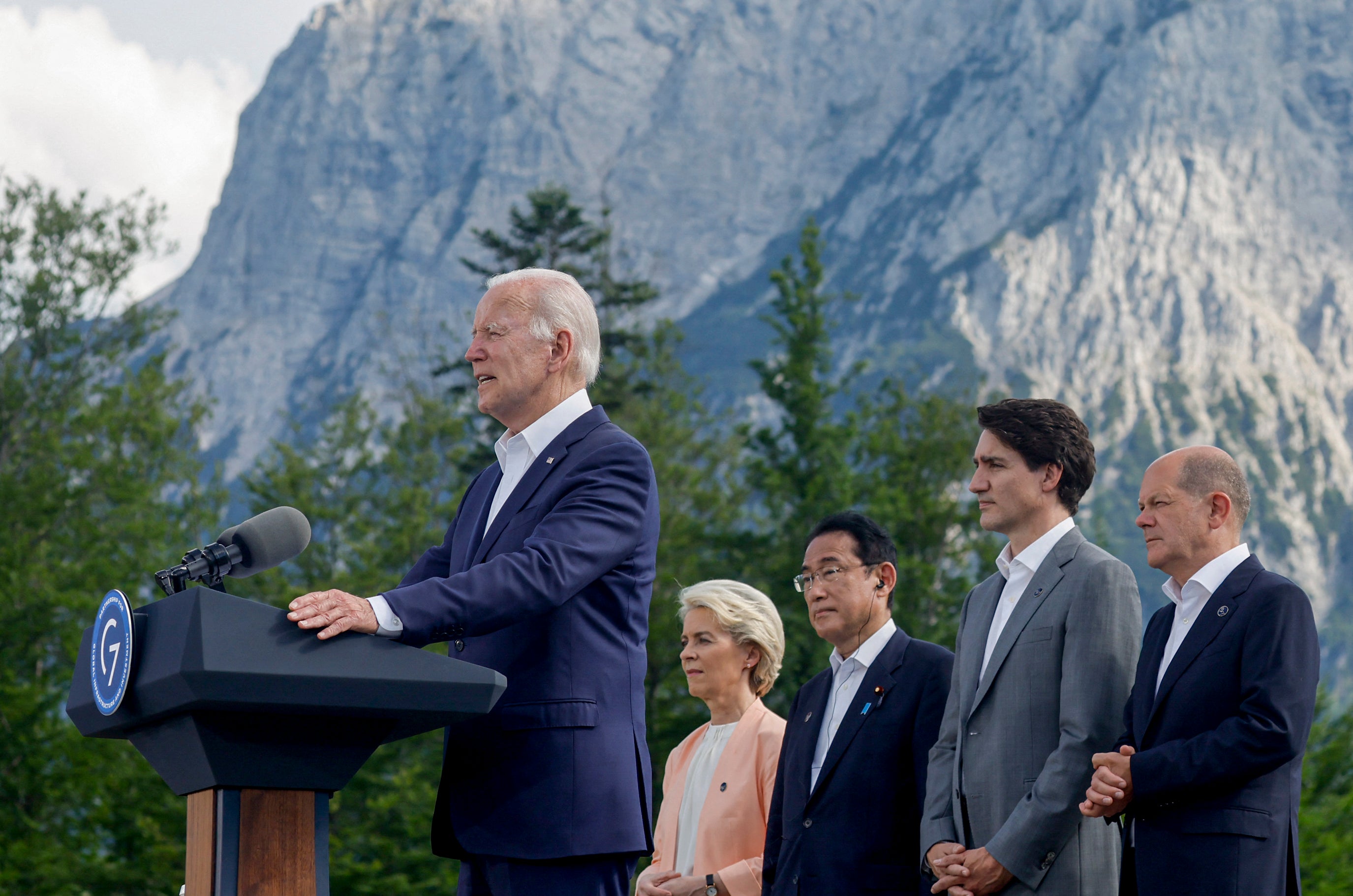 CLIMATEWIRE | Dozens of countries rallied around phasing out fossil fuel financing during global climate negotiations seven months ago. Yesterday, those efforts were weakened by the world’s most powerful economies.

The shift illustrates how the fear of losing access to energy imports — due to Russia’s war against Ukraine — is testing the commitment of countries that have been among the most vocal advocates of curbing climate change.

Leaders of the Group of Seven nations — the United States, United Kingdom, Canada, Germany, Italy, France and Japan — agreed to support public investments in the natural gas sector “as a temporary response” to the abrupt shortfall in global gas supplies created by the pariah status of Russian fossil fuels.

The move announced yesterday at the end of the G-7 summit in Germany threatens to undermine commitments announced by the United States and more than 30 other countries at the climate talks in Glasgow, Scotland, to stop spending public money on international fossil fuel projects by the end of this year (Climatewire, Nov. 4, 2021).

A communiqué released by G-7 leaders sought to soften those concerns by saying its support for continuing gas investments would be “implemented in a manner consistent with our climate objectives and without creating lock-in effects.”

“On one hand there is a strong affirmation of the objectives of the Paris Agreement and of domestic [climate] ambitions, but those ambitions threaten to be undermined by continued support for gas investments,” said Luca Bergamaschi, executive director of ECCO, an Italian climate change think tank.

Gas projects can take years to construct, he added, a timeline that raises questions about the emissions impacts of building liquefied natural gas facilities or pipelines that can be used for decades to come.

That may not matter to G-7 leaders if the investments are directed outside their borders, since that would not defy their commitments to largely decarbonize their transport and power systems by 2030 and 2035, respectively.

“We’re in an unprecedented situation,” said Domien Vangenechten, a policy adviser at E3G in Brussels who pointed to rising coal use in some parts of Europe as leaders look to deprive Russia of fossil fuel revenue. “But at the same time, they haven’t watered down their longer-term [climate] trajectory.”

The G-7 leaders also reiterated a pledge collectively to reduce methane emissions — a powerful greenhouse gas associated with oil and natural gas operations — by 30 percent by 2030. But that pledge, made in Glasgow, is tied to emissions produced domestically, meaning German investments in a potential Senegal gas project wouldn’t affect Germany’s ability to reduce its methane pollution within its borders.

Climate advocates warn that watering down commitments to end gas financing smacks of hypocrisy and could make it harder for wealthy countries to tell poorer nations, particularly those where greater energy access is needed, to cut their reliance on polluting energy sources.

“The question is really who profits from this and what is the best investment for this country, looking at the future,” said Bergamaschi. “And are we investing as Europeans in gas in Africa for us, or for them? Or for who?”

The G-7 was more consistent on its message about the so-called just energy transition, which aims to provide funding for coal-heavy emerging economies to transition to clean energy. A statement from G-7 leaders and other countries that stand to benefit from those partnerships — including India, Indonesia, South Africa and Senegal — refers to “phasing down coal while increasing the share of renewable energies in the energy mix.” It does not mention gas.

“This is very coherent with both the climate objectives of the developed countries and supporting developing countries also in their transition,” said Bergamaschi of ECCO.

Six of the G-7 countries, minus Japan, pledged to end international fossil fuel financing at last year’s climate talks. They all backed that position in a statement from their climate and energy ministers in May.

But rising energy prices and a major supply crunch have made energy security a greater priority than fixing the climate. That’s particularly true for Germany, which until recently depended on Russia for more than half of its gas supplies.

Its leaders have warned of economic upheaval if gas supplies fall too fast. Recent shortages led the country to raise its emergency gas plan to alarm stage and revive old coal plants.

But a report by ECCO found that Europe could cut its gas demand 40 percent by 2030 if the European Union passes legislation to cut emissions alongside a blocwide plan to wean itself off Russian energy.

The International Energy Agency in a report last year said no new oil and gas should be developed if the world hopes to prevent global temperatures from rising to levels where the impacts of increasingly severe storms, heat waves and flooding would be irreversible.

A separate report on Africa’s energy outlook notes that industrialization in Africa will depend in part on expanding natural gas use, but doing so wouldn’t greatly increase the continent’s share of global emissions. Climate advocates point out that investments in natural gas are often intended for export to wealthy nations.

Kaushal Ramesh, an analyst at Rystad Energy, said gas can advance climate objectives if it’s used to speed up coal phaseouts and prepare grids for increases in renewable energy.

“However this needs to be done with proper emissions accounting and mitigation measures,” including around flaring and fugitive methane emissions, he said in an email.

Yesterday’s statement to allow for continued investments in fossil fuels departs from what rich nations committed to during the climate talks, said David Waskow, director of the international climate initiative at the World Resources Institute.

“The question is whether they mean it when they say no lock-ins,” he said. “Is this something that creates a long-lasting legacy for gas in Africa, for example, or is it something else? But it’s not clear how the something else would be achieved.”

That could hurt efforts in the United States and other nations to decarbonize if it means extending their reliance on fossil fuels. It could also draw money away from investments in renewables or energy efficiency.

The pledge in Glasgow to end international fossil fuel investments would have freed up $15 billion a year for clean energy, according to a preliminary report.

The Case of the Incredibly Long-Lived Mouse Cells

Death, Sex and Aliens: A Surprising History of Slime