Risk of Dangerous Heat Exposure Is Growing Quickly in Cities 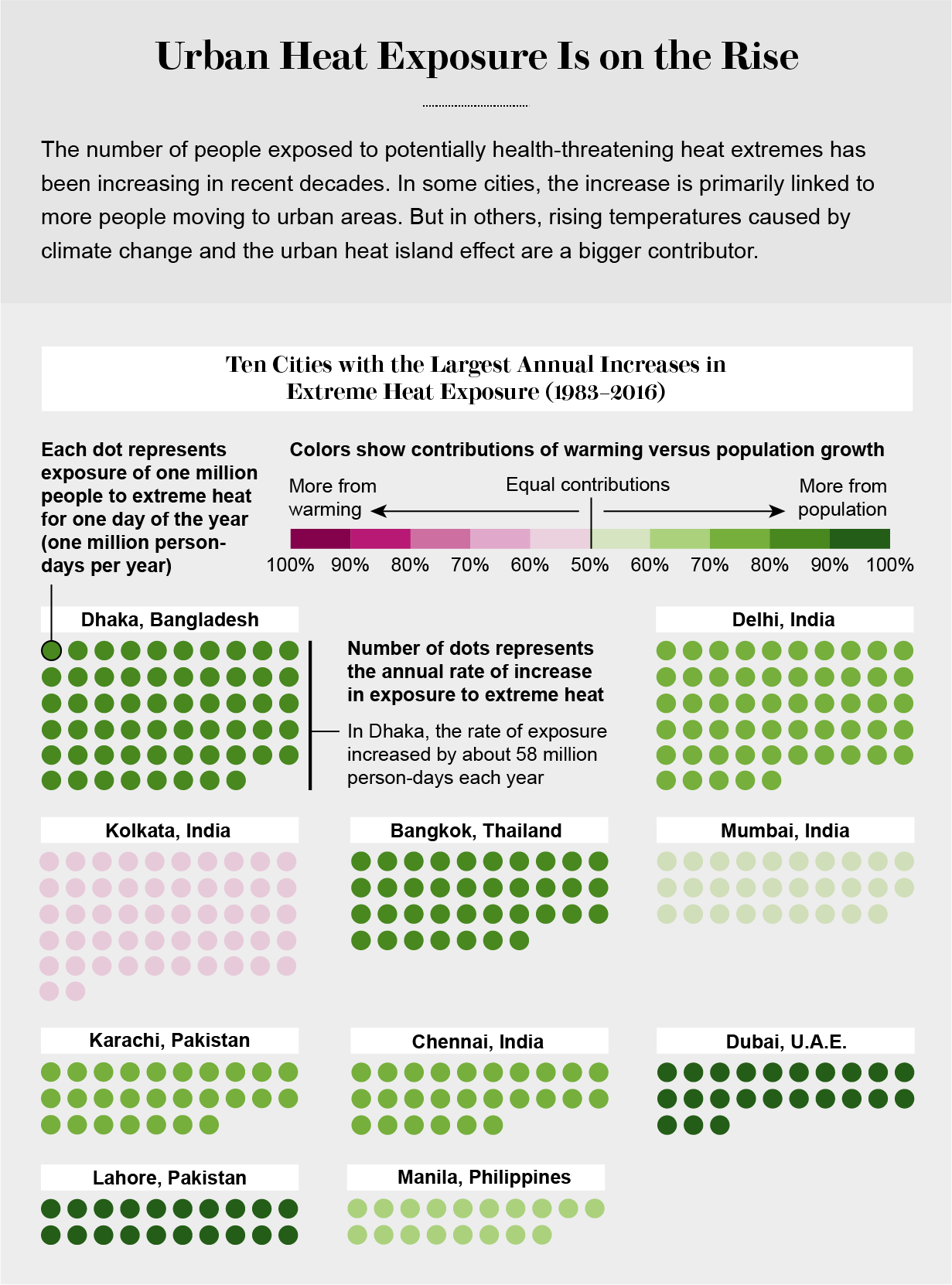 
Cities are famously sweltering places during heat waves, with pavement and buildings radiating heat back into the air and elevating temperatures compared to nearby rural areas. Add in global warming and an increasingly urban population, and you have a recipe for quickly ratcheting up the number of humans exposed to health-endangering heat. This exposure has tripled in recent decades—a faster rise than previous research suggested—a new study finds.

In what the authors say is a first, the study has produced a city-by-city breakdown of how much of that increased exposure is a consequence of population growth, and how much is from physical heating (a combination of climate change and the so-called urban heat island effect). The aim, the scientists say, is to help policy makers better target strategies to protect vulnerable people. “Our study is a jumping-off point to start helping those in need,” says co-author Cascade Tuholske, a geographer at Columbia University’s Earth Institute.

When human bodies overheat they can become dehydrated, causing the blood to thicken and forcing the heart to pump harder. That can damage it, as well as other organs. Heat is particularly a threat to those who already have health complications, such as heart disease. Very high levels of heat stress and soaring humidity can stymie the body’s natural cooling system—sweating—a disruption that can cause heat exhaustion and heat stroke. In theory, even a healthy, well-hydrated person sitting in the shade could succumb when a measurement called wet-bulb temperature, which factors in air temperature and humidity, reaches 35 degrees Celsius (95 degrees Fahrenheit).

Previous research had suggested parts of the world would see heat waves hit that threshold later this century, as global temperatures continued to rise because of greenhouse gases released by burning fossil fuels. But a 2020 study showed some areas were already reaching it periodically. Now the new paper, published October 12 in Proceedings of the National Academy of Sciences, underscores that heat extremes are a pressing issue right now.

The researchers examined trends in heat exposure for more than 13,000 cities from 1983 to 2016. They used a data set they say is more detailed than those used in previous studies and thus more accurately captures heat extremes. This particularly applies to places where there have historically been fewer temperature measurements on the ground, such as sub-Saharan Africa, the Middle East and South Asia.

Results showed that overall urban heat exposure increased by nearly 200 percent, affecting some 1.7 billion people—about a quarter of the world’s population. Physical warming accounted for about one third of the increase in the number of people exposed to hot days per year, while the rise in urban populations accounted for about two thirds.

But how those contributions broke down varied from city to city, and from region to region. In areas where there have been major demographic shifts toward cities (such as parts of southern Asia, the Middle East and sub-Saharan Africa), population change tended to dominate the increase in exposure. In regions with slower urban growth, such as parts of Central America and the Caribbean, warming was a bigger contributor. But warming was still the dominant factor in some areas with rapid urbanization, including in the Ganges Delta and along the Nile and Tigris-Euphrates river systems. Those are areas where humid heat may be playing a particular role in driving up exposure, the study authors suggest.

The findings show the importance of looking at specific cities instead of whole regions, the authors say. They cited the examples of Delhi and Kolkata in India; though both cities had similar increases in heat exposure, population growth was a much bigger contributor to the trend for Delhi. Knowing such differences can help focus adaptation strategies, Tuholske says.

The global database he and his team assembled could also be useful in helping cities learn adaption strategies from one another, Tuholske says. “All of these cities are dealing with the same problem.” Kristie Ebi, who studies the health risks of climate change at the University of Washington and was not involved in the new research, echoes that thought: Having a consistent data set for so many cities “facilitates comparisons,” she says.

The new research is “an important step towards thinking more deeply about human exposure to heat, both now and in the future,” says Jennifer Vanos, who researches heat health impacts at Arizona State University and also was not involved with the study. She cautions, though, that there are other factors to consider in designing heat health policy. Some people, for example, have readier access to air conditioning and would be less likely to suffer during intense heat waves, while those with existing health problems or who work outdoors might be more likely to become ill. Ebi says that the model could be improved in the future by including such differences in vulnerability.

Vanos adds that the results of the study are most helpful for areas that experience both high heat and humidity, which also tend to be poorer regions of the world and ones where heat exposure is less well studied. “Policy makers should see the essential need for improving adaptive capacity and overall health in these regions,” she says, “and importantly realize that these heat issues are not future problems, but problems of today and yesterday that need sustainable solutions now.”

Our Xiaomi 12S Ultra video reviews are out