Redfin Co. (NASDAQ:RDFN) Given Average Recommendation of “Hold” by Analysts

Redfin Co. (NASDAQ:RDFN – Get Rating) has received an average recommendation of “Hold” from the fourteen brokerages that are presently covering the firm, MarketBeat Ratings reports. Eight analysts have rated the stock with a hold rating. The average twelve-month price target among brokers that have issued a report on the stock in the last year is $27.77.

What’s the highest-yielding stock you’ve ever owned? The dividends for these stocks have risen so fast over the years that they’re now yielding us an average of 26%!

When you start getting paid 26% on your money, your financial problems tend to pretty much evaporate.

Redfin (NASDAQ:RDFN – Get Rating) last issued its quarterly earnings data on Thursday, May 5th. The company reported ($0.82) EPS for the quarter, topping the consensus estimate of ($1.09) by $0.27. Redfin had a negative return on equity of 53.87% and a negative net margin of 7.31%. The company had revenue of $597.30 million during the quarter, compared to analyst estimates of $553.97 million. During the same quarter in the previous year, the firm earned ($0.37) earnings per share. Redfin’s revenue was up 122.6% on a year-over-year basis. On average, analysts predict that Redfin will post -2.12 earnings per share for the current year.

Redfin Corporation operates as a residential real estate brokerage company in the United States and Canada. The company operates an online real estate marketplace and provides real estate services, including assisting individuals in the purchase or sell of home. It also provides title and settlement services; originates and sells mortgages; and buys and sells homes. 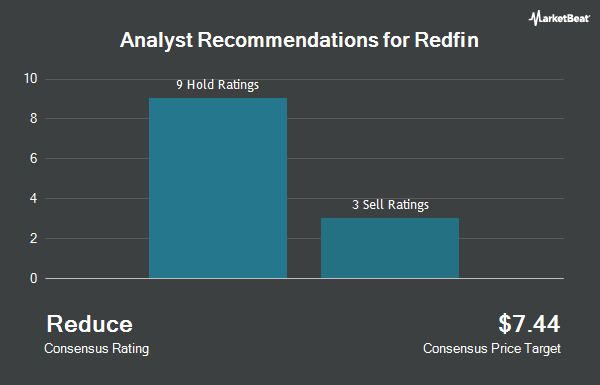 This instant news alert was generated by narrative science technology and financial data from MarketBeat in order to provide readers with the fastest and most accurate reporting. This story was reviewed by MarketBeat’s editorial team prior to publication. Please send any questions or comments about this story to contact@marketbeat.com.

Before you consider Redfin, you’ll want to hear this.

MarketBeat keeps track of Wall Street’s top-rated and best performing research analysts and the stocks they recommend to their clients on a daily basis. MarketBeat has identified the five stocks that top analysts are quietly whispering to their clients to buy now before the broader market catches on… and Redfin wasn’t on the list.

While Redfin currently has a “Hold” rating among analysts, top-rated analysts believe these five stocks are better buys.

The Week Ahead: Why interest rates and reputation are on the lunch … –…