(RNS) — My mother, a nurse practitioner and pro-life Christian, worked at Planned Parenthood while pregnant with me. I did not know this until recently, until after I published a book about my choice not to become a biological mother.

“I started reading your book,” she told me.

“I never told you your only options in life were mother or Mother Superior, did I?” she asked.

“No, mom. That was the Catholic Church. You taught me the proper way to pronounce clitoris and how to talk to the Holy Spirit.”

It was 1984, in Nashville, Tennessee, and my charismatic mother (who would later convert to Catholicism for my father) had taken a job at Planned Parenthood’s teen health clinic, a job that was as much about diagnosing eczema in pubescent youth as it was treating them for sexually transmitted infections and talking to them about family planning. And, yes, she made the occasional abortion referral.

“But you still considered yourself pro-life?” I pressed her.

“Of course,” she replied evenly. “Pro-life to me meant pro-responsible life. I always told you, your body is a gift from God but it’s up to you to enjoy wisely.”

I’ve been thinking a lot about the impact of my mom’s pro-life legacy on me lately, for obvious reasons. The constitutional right to abortion has been overturned and once again revealed the strange fruit of a mother-venerated, woman-phobic country.

I am not shocked by this outcome, but I am worried. (Worry is actually not a familial legacy, the most memorable refrain of my childhood being “Lighten up, Erin.”)

I am worried about the outsized impact this ruling will have on the poor — a category of people for whom I was taught Jesus had an outsized preference.

I am worried about the intimate impact this ruling will have on me — a woman who sees her choice not to bear biological children as a calling akin to the priesthood, whereby one abstains from having a natural family to be more available to the improbable family of God.

If I’m being honest, though, my most pesky and visceral worry is this: that one of my daughters will unintentionally, prematurely get pregnant and become captive to her own life rather than its co-author.

That I’m now raising three teen daughters, along with my husband, is as much a shock to me as it was to everyone to whom I had declared myself “child-free for the common good” in my 20s. But the common good has a way of roping you into group projects you never expected. Our girls, school-age sisters we met through foster care, didn’t expect to be adopted by a couple of principled progressives either. Community, not parenting, compelled us to sign up for what we expected would be a satisfying but ultimately temporary endeavor. We hoped they’d be able to reunite with their family of origin. They hoped to do likewise.

So, my daughters already know the cost of living in a country whose family friendly values aren’t backed by family friendly safety nets — or safety nets that are only available for some families, the “desirable” kind of families. They already know the resignation that comes when a court, who didn’t think to ask you, decides for you. What they need is to feel the unruly joy — and responsible worry — of what it’s like when life happens with you and not to you. I imagine we all need to feel this now.

After the Supreme Court decision came out, my mom told me about the women she cared for, over the course of her 20-plus-year career, who risked a “with,” not “to,” kind of life. She told me about the woman who said, “If I don’t terminate this pregnancy, my boyfriend will.” (I’ve learned adults and teens denied abortion care are more likely to stay in abusive relationships.) She told me about the depleted woman who simply couldn’t afford one more mouth to feed, one more body not her own. (Another learning: Despite the stereotype, the majority of people who seek to terminate their pregnancy are already parents.)

I told my mom that with more than 400,000 children in the U.S. foster system, this country’s already revealed its ghastly inability to care for who’s already here. We commiserated on the couch together. How cruel to laud a child’s life and neglect its mother’s, to laud a mother’s life and neglect a woman’s. This is not pro-responsible-life. This is pro-patriarchy.

So, I am naturally worried. I am weary. I am depleted of disappointment. But I am not without hope. Not when I remember that no matter what church or state says, there always has been and always will be people like my mom — nurses and doctors, sex educators and congregational leaders, wise friends and cool aunts — willing to tell the truth that life is choice. That the call is not to abdicate or inflate our sense of agency but to be faithful to the sliver we’ve been given. 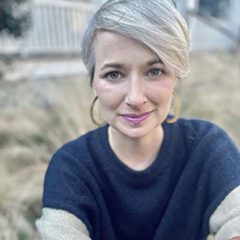 I chose to become a mother — albeit in an unconventional way — and there are still days when I flop onto my bed with a quiet “this is not what I signed up for” scorn. While I know this is normal, I also know it’s not a good look. And I’m sure it’d be dumpster loads worse if I felt forced into parenthood. So now it’s my turn to choose life within the life I’ve been given and teach my daughters to do the same — or, as I put it in my book, to know the satisfaction of writing our own stories, within some bigger stories.

Thank God for my mom who already provided an epigraph, when she said, “Mother or not, your body is sacred and your body is yours.”

(Erin S. Lane is author of “Someone Other Than a Mother: Flipping the Scripts on a Woman’s Purpose and Making Meaning Beyond Motherhood.” She lives in Raleigh, North Carolina, with her improbable kin. The views expressed in this column are not necessarily those of Religion News Service.)

These companies are paying for abortion travel

As Pennsylvania’s ‘Bible belt’ evolves, clergy look to one another…