(The Conversation) — Ever since Russia began its invasion of Ukraine on Feb. 24, 2022, analysts picking apart Vladimir Putin’s motives and messaging about the war have looked to religion for some of the answers. Putin’s nationalist vision paints Russia as a defender of traditional Christian values against a liberal, secular West.

Putin’s Russia, however, is only the latest in a centuries-long lineup of nations using religion to bolster their political ambitions. As a Jesuit priest and scholar of Catholicism, I’ve seen in my research on nationalism and religion how patriotic loyalties and religious faith easily borrow one another’s language, symbols and emotions.

Western Christianity, including Catholicism, has often been enlisted to stir up patriotic fervor in support of nationalism. Historically, one typical aspect of the Catholic approach is linking devotion to the Virgin Mary with the interests of the state and military.

The birth of a belief

An Egyptian papyrus fragment from the fourth century is the first clear evidence of Christians’ praying to the Virgin Mary. The brief prayer, which seeks Mary’s protection in times of trouble, is written in the first person plural – using language like “our” and “we” – which suggests a belief that Mary would respond to groups of people as well as individuals.

That conviction appeared to grow in the following centuries. After the Roman Emperor Constantine converted to Christianity in A.D. 312, the new faith developed a close relationship with his empire, including a belief that Mary looked with particular favor on the capital city of Constantinople. 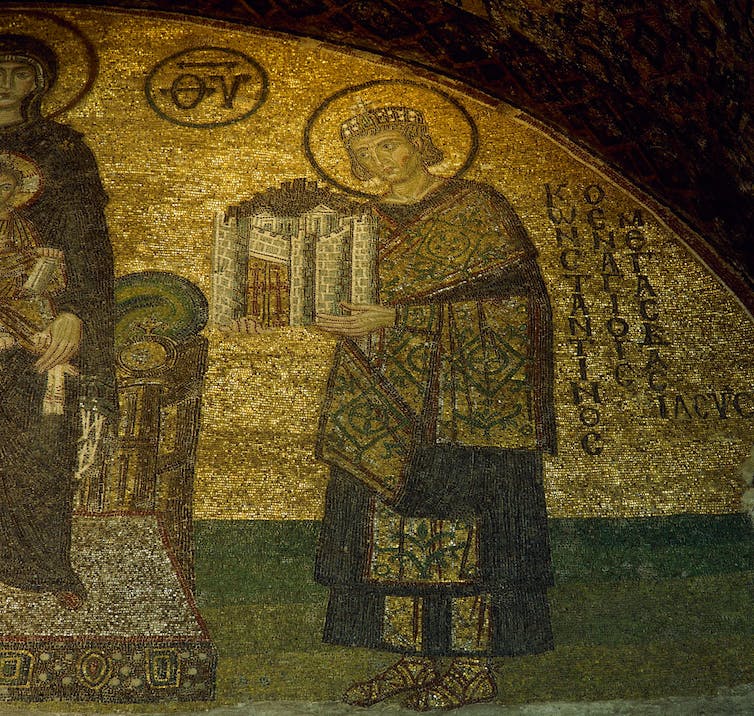 A 10th-century Byzantine mosaic of Constantine the Great offering Constantinople to the Virgin Mary, at the Hagia Sophia in Istanbul.
Photo by PHAS/Universal Images Group via Getty Images

Political and religious leaders asked the Virgin for victory in battle and shelter from plagues. In A.D. 626, Constantinople was besieged by a Persian navy. Christians believed that their prayers to the Virgin destroyed the invading fleet, saving the city and its inhabitants. The Akathist hymn, which has been prayed in both the Orthodox and Eastern Catholic churches ever since, gives Mary the military title “Champion General” in thanks for that victory.

In the Catholic West, military successes such as European victories over the Ottoman Empire were attributed to Mary’s intervention. Her blessing has been sought on imperialist endeavors, including Spain’s conquest of the Americas.

RELATED: New report details the influence of Christian nationalism on the insurrection

Even today, Mary holds the title of general in the armies of Argentina and Chile, where she is considered a national patroness. The same association between Marian devotion and patriotism can be found in many Latin American countries.

Off the battlefield, many Catholic cultures have historically felt they had a special relationship with Mary. In 1638, King Louis XIII formally dedicated France to the Virgin Mary. Popular belief interpreted the subsequent birth of the future Louis XIV as Mary’s miraculous reward, after 23 years of waiting for a male heir.

About two decades later, Polish King Jan II Kazimierz consecrated his country to Mary amid a war. Both acts reflected church and political leaders’ beliefs that their countries had a sacred mission and divine approval for their political ambitions.

When these kinds of beliefs become widespread in a society, many scholars would label them religious nationalism – though there is a long-standing debate about when affection for one’s country becomes “nationalism.” There is widespread consensus, though, that religion is one of the most common elements of nationalism, and many nationalist projects have invoked Mary’s blessing.

Polish territory, for example, was divided between Russia, Prussia and Austria for more than a century. But Polish Catholics continued to address Mary as “Queen of Poland.” Her title asserted the existence of the Polish people as a nation. And it implied that efforts to reestablish Poland as a sovereign country had a heavenly helper.

Similarly, in the 19th century, both Queen Victoria and the Virgin Mary were referred to in different contexts as “Queen of Ireland,” expressing two rival visions of Ireland: part of the Protestant United Kingdom, or a separate and essentially Catholic country. 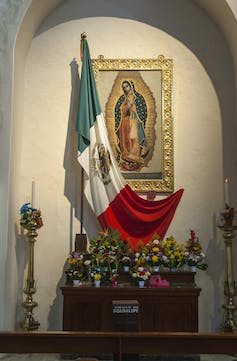 An illustration of the Virgin de Guadalupe in the Cathedral San Ildefonso in Mexico.
John Elk III/The Image Bank via Getty Images

Many different movements have used the figure of the Virgin to support their agendas. In colonial Mexico, the figure of Our Lady of Guadalupe, one title for Mary, was originally interpreted as being a champion of the “criollos,” native-born inhabitants of Spanish descent. During the 1810-21 War of Mexican Independence, “la Guadalupana” figured on the banners of the “independista” forces. The Spanish army, meanwhile, adopted the “Virgin of Los Remedios,” another title for Mary, as their own patroness. She would later be invoked in support of Indigenous people and mestizos, people with both Indigenous and Spanish ancestry.

Mary is invoked not only by nationalist causes. Sometimes she is inspiration for countercultural or protest movements, from the pro-life cause to Latina feminists. Labor leader Cesar Chavez placed the image of Guadalupe on banners as his organization marched for farmworkers’ rights.

All these uses draw on the ancient belief in Mary’s power to intervene in times of trouble. However, ideological, political and especially military ambitions and religious sentiment are a volatile mix. As the current war in Ukraine shows, allegiance to one’s nation, especially when it claims Christian inspiration, can inspire both imperialist expansionism and heroic resistance to it.

This makes a better understanding of religious nationalism urgently important, especially for the church. Twentieth- and 21st-century popes have condemned aggressive nationalism but have not defined it clearly.

In cultures that are largely secularized, appeals for Mary’s protection or claims that she has a special relationship with any one nation are now likely to seem archaic, outlandish or sectarian. But what I know of both Marian devotion and national identity has convinced me that ancient patterns often survive and reassert themselves in new times and places.

Even where the practice of Catholicism is in decline, Mary’s cultural significance remains strong. And religion continues to be a regular element of many nationalist agendas.

My guess is that we have not seen the last of the warrior Virgin.

(Dorian Llywelyn, President, Institute for Advanced Catholic Studies, USC Dornsife College of Letters, Arts and Sciences. The views expressed in this commentary do not necessarily reflect those of Religion News Service.)

RELATED: How the church’s focus on Mary’s virginity became a curse for women