How much are they going up?


She said that producer prices have gone up as feed prices climb. For larger retailers, shipping also adds costs with high gas prices. These factors contribute to higher meat prices for steak, pork chops, ground beef and chicken, which is tracked by the United States Department of Agriculture.

During the busy holiday weekend, a survey from the National Retail Federation found that 84% of Americans plan to celebrate. Of those celebrating, 59% are getting ready for a classic cookout.

Steak prices have fluctuated, and have risen slightly. The most recent data reported by the USDA in May shows it up to $9.690 per pound. In May of last year, steak was valued at $9.120 per pound.

Lori Driskill-Lange said, while shopping at the Groceryland in Springfield on Thursday, that the rise in meat prices have impacted her family as they try to often cook at home and eat together. As a result, her family has decided to a buy cow from a farm in South Vienna that will be butchered there. The idea is that by buying in bulk, it will be cheaper in the long run.

“When you are feeding several boys at the house, the cost definitely add up over time,” Driskill-Lange said, noting that when meat at stores do go on sale, it is still pricey.

Price changes manifest differently in larger retailers and wholesalers than in small businesses with a more niche market like Carroll Creek Farms.

“We set our prices, so we haven’t changed them,” Campbell said.

COVID-19 upped prices for larger retailers in 2020 as personnel at meat-packing plants were overwhelmed by the pandemic. This negatively impacted American families who were spending more on eating meat at home. The impact was different for local farms.

“For small local operations, it’s been very beneficial. People were eating in their house more, so cooking more, using the whole carcass more and worried about sustainability,” Campbell said.

The price change happens alongside a rising demand, which is common for the summer season.

“There’s a seasonal run-up in the summer because there’s more demand,” Campbell said.

She suggests adapting to this by getting creative with your cooking skills, like purchasing a whole pork loin and cutting it into pork chops in your home kitchen or substituting ground beef for chorizo in tacos.

“I think it’s about thinking outside of the box, if you’re trying to be more affordable in your protein choices,” Campbell said.

On Thursday, business was brisk at the Dale Zink Meat Market on North Riley Boulevard in Franklin as a steady line of customers came and took their number before placing their meat order.

A customer looks over the selection of meat at the Dale Zink Meat Market in Franklin on Thursday June 30, 2022. Pete Zink runs the family-owned business and said business has been going nonstop and expects it to continue. While the costs of bacon and boneless chicken breast are up 30% and steak products are up 20%, Zink said people are still coming in to buy meat and chicken. ED RICHTER/STAFF 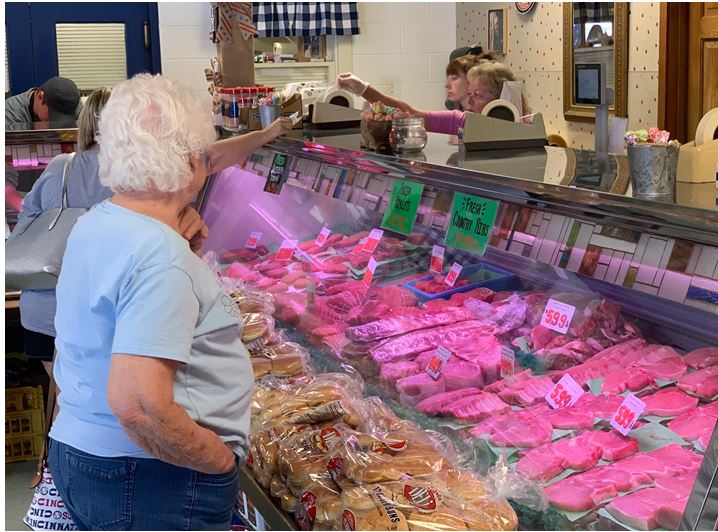 A customer looks over the selection of meat at the Dale Zink Meat Market in Franklin on Thursday June 30, 2022. Pete Zink runs the family-owned business and said business has been going nonstop and expects it to continue. While the costs of bacon and boneless chicken breast are up 30% and steak products are up 20%, Zink said people are still coming in to buy meat and chicken. ED RICHTER/STAFF

“We’re going nonstop for the Fourth of July” said Pete Zink who runs the family-owned business now in its sixth generation. “During COVID-19, we had lines going to the firehouse because we had limitations on the number of people in the building.”

“I try to keep certain items priced lower, such as ground product prices.”

However, Zink said prices for other items such as canola oils used in salads and paper products have spiked due to ongoing supply chain issues. The oil he uses was $65 a case and is now $200 a case. He also said other items he sells, such as Mehaffies Pies, have gone up.

He predicts corn and hay will be higher this year, as much as 30% to 40%, because farmers had been paying much higher product costs for fertilizer, fuel, etc. Zink said those costs will hit food chain and trickle down to the consumer in the next six months.

The higher costs did not deter some customers.

Shirley Smith said she comes to the Zink Meat Market on a weekly basis and her buying habits haven’t changed much recently. “I watch for better buys and I’m eating more chicken” she said.

Another customer, Michelle Gorsuch, said she wasn’t changing her buying habits either because everything else is going up. She also said she loves the family-owned business.

Reporter Ed Richter and Hasan Karim contributed to this story.